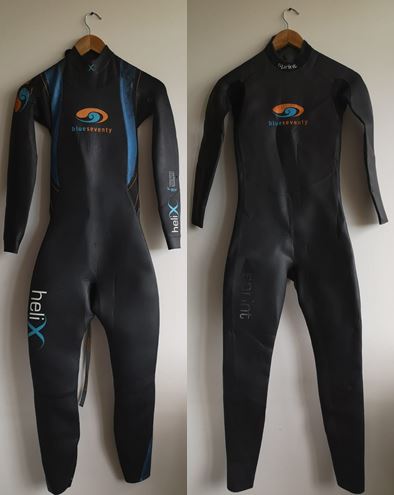 I think we can acknowledge that user experience is subjective, nevertheless in my opinion it’s a crucial part of the process of acquiring something. The same goes also for acquiring a triathlon wetsuit. There are a lot of state of the art and qualitative triathlon wetsuit manufacturers which makes the choice very challenging.

In my mind there are three ways how to proceed with this process. One way could be that the potential buyer can start by gathering user experiences – reading reviews and comments, speaking with wetsuit users. Afterward the potential buyer can visit the manufacturer websites and check them out. The second way could be vice versa – checking out manufacturer websites and then gathering user experience. And the third way would be mixing them both along the way.

I will share my experience with three wetsuits – Orca S2, Blueseventy Helix TST and Blueseventy Sprint.

Orca S2 was my first triathlon wetsuit. It was already long time agoI purchased it around 2008 or 2009. It was during my first steps (or strokes) in triathlon. Why Orca S2? It was accessible. During that time in Latvia there were not a lot of triathlon wetsuit sellers. Also, the price of the wetsuit was acceptable and my knowledge was insufficient to make in depth comparison with other brands. Simply said, I just needed a wetsuit and Orca was the easiest to get my hands on. Additionally, as a newbie in triathlon I chose an entry level wetsuit of Orca which was S2.

I remember that I liked the Orca S2 wetsuit. It fitted well and was buoyant enough for my swim skills. I could get out fast and easy enough in the T1. The only disadvantage was the chaffing on the neck. I also did my first Ironman 70.3 race in Mallorca, Spain in 2011 in the Orca S2 wetsuit.

Now Orca has already the seventh generation of the wetsuit – Orca S7.

In 2010 I joined the amateur triathlon team “IRONMAN.LV”. The need to look for a new wetsuit had two main reasons. Firstly, I got less bulky and the old wetsuit didn’t fit so well anymore. Secondly, as an inexperienced triathlon wetsuit user I had damaged the wetsuit (mainly in the crotch). Time to get a new wetsuit!

Why did I choose Blueseventy Helix? It was a suggestion from the team “IRONMAN.LV” coach. He said at that time that he hasn’t swum in anything better than Blueseventy Helix. He was swimming in a Helix3. So the aim of my search was clear – Blueseventy Helix. As I couldn’t afford a new one I was searching for used ones on Ebay. I was lucky and found a used Helix TST which had a good price and was in very good condition. I used the official sizing chart and was spot on with the size.

It was a new experience for me switching from an entry level wetsuit to a pro level wetsuit. It has a reverse zipper which required some time until I could close it by myself. The neoprene on arms is noticeably thinner and more stretchable. It has knee-flex and quick-exit legs. It all adds to the comfort and speed in the water as well as in the T1. Additionally, I want to highlight the durability of the wetsuit. The wetsuit is approximately 11 years old and I am still swimming in it. Of course, it has some minor damages from nails and few holes by the seams on the arms, as well as the neoprene is wearing out on the shoulders from the sea water and sun. But still it’s doing its job! Amazing!

You can check out the price for the newest Blueseventy Helix here.

As I wrote before the Helix is still doing its job, nevertheless it was time to look for a replacement. Surfing through endless offers on the internet I came across a good offer for a Blueseventy Sprint wetsuit. It was not the newest model. Lately, I found out that it’s the first model of Sprint wetsuits from 2008. It is all black with Blueseventy logos and “Sprint” written on the right leg. It is an entry level wetsuit from Blueseventy and I just wanted to compare it with a pro level Helix which I have.

There are some noticeable differences in regard to Blueseventy Helix TST. It has no reverse zipper which means it’s easier to close (especially for beginners), but could cause chaffing on the back of the neck from sighting. It has no real quick-exit feature and it is harder to get out of the wetsuit. The neoprene on the arms and shoulders is thicker and not so flexible which means your shoulders get faster fatigued from the restricted range of motion.

You can check out the price for the newest Blueseventy Sprint here.

Where will I guide my experience next?

I am still in a look-out for a new wetsuit. I know now that I will look for a wetsuit which has a buoyancy profile closer to “head down-feet up”. At the moment I am considering Zone 3 Aspire and maybe something from Roka, as well as I would like try the two part wetsuits which means I would need to go for Orca or DeSoto.