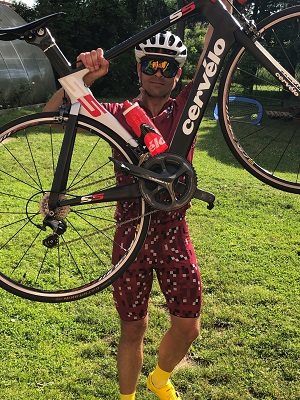 In this post you can read about the experience regarding triathlon wetsuit use of Kaspars. He’s participating in triathlon and running competitions as a part of the army sports team “ASK PATRIA” from Latvia. He shares his experience about Orca S3 and Orca Open Water Core wetsuits. Many thanks for sharing his experience!

“Swimming has always been my passion. I started to swim quite early when I was 4 or 5 years old. In that time I wasn’t think about technique, equipment and other stuff now I do, I just swam like I knew and that process gave me a lot of joy. Now I’m 33 years old and a lot has changed regarding swimming in my life.

Firstly until 25 I have swam only in pools where I developed my skills and outdoor or open water swimming was only for fun. Secondly until that time, how funny it sounds, I thought that wetsuits are worn only by scuba divers. When I was 25 I started to get interested about triathlon and Ironman and then realized the fact that wetsuits are worn by sportsman’s as well to improve their swimming skills like speed, performance and durability.

At 29 I performed my first triathlon. It was a swim course at half Ironman distance (relay team) and it was my first experience with wetsuits. One week later I finished my first full triathlon – sprint distance. In this year I’m spending my 5th triathlon season which unfortunately due to Covid-19 is shorter. During those 5 seasons I have worn only 2 wetsuits and 2 additional wetsuits just for trying.

Orca S3 was my first wetsuit. In that wetsuit I performed my first swimming course during a half Ironman distance. Concerning that race my participation was applied without any preparation because there was no swimmer in the relay team and I was a good candidate for it. Next day my colleague (now my training partner) gave me a wetsuit. It wasn’t new wetsuit. Actually it was quite old and a lot of times already repaired. I tried it on and it fitted me well. After competition I felt very special because despite the fact that wetsuit was old and repaired I performed very good at swim part. Swimming was smooth, fast and not so tiring compering to swimming without wetsuit. It was my first experience swimming with a wetsuit and from that day my open water swim training I try to perform in a wetsuit.

From my amateur triathlete point of view if you are not a professional swimmer wetsuit will help you. I had talk to athletes who are professional swimmers and almost professional and all of them told me: “For those who swim very well it’s up to you use it or not, but those who are not, wetsuit will definitely help”. I agree with that statement – I have checked it and it’s true. Wetsuit gives you additional power when your arm is stretched and you pull the water. Of course wetsuits have a lot of pros, but still there are some cons for example swimming when water temperature is above 24 degrees Celsius. At first I have ignored that issue, but later on I realized that it’s not worth it. After 10 minutes of intensive workout you are all wet not from incoming water but your sweat, your heart rate increases and fatigue occurs which most of the time reflects on your results. I haven’t tried pro level wetsuits in such conditions, but I believe they have the same problem.

Shame on me, but I as at triathlon enthusiast have used damaged Orca S3 used for 3 seasons. I saw the problems, but I didn’t do anything to change it because triathlon consists of 3 different type of sports and all types need special equipment. It’s all about a money. The most expensive is cycling due to reliable, fast and durable carbon bike. Anyway I decided that I need a new wetsuit. My requirements were durability, visibility, convenience and also outstanding appearance, but at the same time cheap. I realized the fact that I haad to stay in entry level. After some research I discovered the wetsuit which met my needs – Orca Open Water Core.

That specific wetsuit is very visible due to it’s color (a lot of orange). I bought it at the end of the last season, but tried it only this year. I’m happy about my choice. I have tested it in different conditions including swimming in quite cold water (approximately 14 degrees).  The wetsuit is thin 2-2.5mm but it holds warmth very well and that means you can stay in cold water for a longer period of time. Usually I plan my swimming workout at least for 4 or 2 km long. After that time or distance I am able to continue, because I don’t feel tired due to it’s flexibility. Movement freedom is fantastic. I have tried and tested it at the triathlon competition. It is quite easy to get out of it during T1. Really suggest it to everyone who wants to rise performance in swimming competition and training and at the same time wants to save money.

I’m convinced that one day I’ll switch to pro level wetsuit. Regarding triathlon I already started to switch to a long course triathlon like Ironman70.3 and 140.6. In this year I’m planning to participate in Ironman70.3 which will be held in Tallinn, Estonia. What I’m looking for in the future is something from Roka collection like Roka Maverick Pro II or Roka Maverick X2. These wetsuits are top of the top and I have read a lot of good reviews. Buts still the issue is money. Both of them cost more than 800 Euros. At the moment I’m not ready to invest such amount of money. Will see what happens after my first Ironman70.3 (will participate with my Orca Open Water Core). Perhaps I’ll change my mind and my main goal for the next year will be a new wetsuit instead of new TT bike. Who knows?! If money will still be the main issue I would buy Roka Maverick comp II which is the best wetsuit from entry level. Despite the fact it’s entry level it still costs more than 400 EUR, but it would be a very big step toward pro level wetsuit. Worth it? Will see.