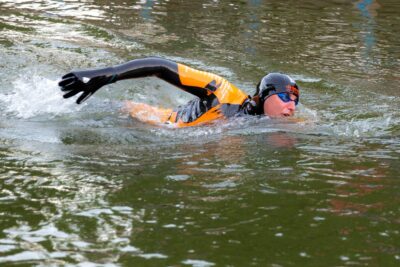 Experience of Maarten (Swim of Elfstedentocht)

Maarten van der Weijden is a long distance and marathon swimmer from the Netherlands. During his career  he has been the Dutch national champion at the 1500 m, 800, 400 m freestyle , as well as  5 km and 25 km open water. In 2001 he was confronted with leukemia, fortunately he survived and made a fantastic comeback in 2003. After the comeback he reached the highest point in his professional swimmer career – he won the 25 km at the 2008 World Championships and Olympic silver at the 10 km open water marathon race at the 2008 Summer Olympics in Beijing. After his comeback Maarten van der Weijden started to swim also for charity with the aim to raise money for cancer research.

“Accept bad luck, live your life and connect!” is the motto of Maarten. I think it’s perfect in it’s simplicity!


Please tell the readers about yourself and about your carrier as a swimmer.

In 2008 I won Olympic gold in the open water swimming (10km), I retired immediately, but started swimming for charity in 2017. I have my own foundation (Maarten van der Weijden Foundation) and I raised almost 12 million euro in one year for the (future) cancer patient.

Tell us about your last venture – swimming the entire track of the Elfsedentocht. Why did you swim it?

Why did you choose this particular route? What was the hardest during the swim? In 2001 I got leukemia and fortunately I recovered. A few years ago I realised I was dealing with a ‘survivors guild’ and that I wanted to raise money for cancer research and projects, so more people could have the luck that I had when I was diagnosed cancer. My strenght is swimming long distances and in the Netherlands there’s one ultimate water ‘parcours’: the Elfstedentocht (almost 200km along the province Friesland). It’s an ice-skating tour, but it hasn’t been held any more since 1997 because of the lack of ice. In 2018 I tried to swim the 200km route, but failed because of health reasons and had to stop at 163km. In 2019 I successfully completed the 200km. The hardest during my first attempt was my mindset. I wasn’t halfway yet and I was in so much pain when I realised I had to swim another 120km, not knowing when the finish would be. This feeling of hopelessness made me want to quit. During my second attempt I had some problems with my wetsuit and a lot of scratches that hurt.

In my website I am sharing the experience of swimmers regarding the wetsuits they use. Please share yours.

I was wearing a wetsuit designed for me with Duraflex (an ultra flexible and sustainable material) and whaleskin (more info below). I had a zipper in my suit at my bottom, just in case I had to use the toilet. Pros were that the suit kept me warm (my core temperature never dropped beneath 36.3 degrees, despite I was lying in the water for almost 3 days), cons were the scratches that hurt while swimming. I’m having scars from 2018 and 2019 that will never go away. 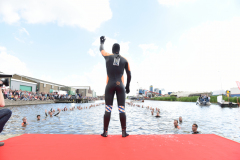 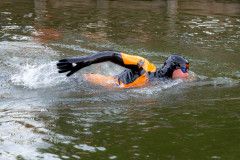 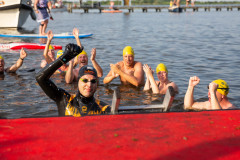 Which wetsuit did you use during the swim of the Elfstedentocht? What other accessories did you use?

I was wearing a suit for DeBoerWetsuits, a body with cap beneath it, gloves and boots (Huub).

If you would need a new wetsuit which one would you choose and why?

The suit I was wearing was good for swimming the Elfstedenzwemtocht. I think you have to see per swimming tour which wetsuit fits the best with the conditions you’re dealing with.

Thanks to Maarten for connecting and sharing his experience. Wish him all the best and great success whit his foundation!